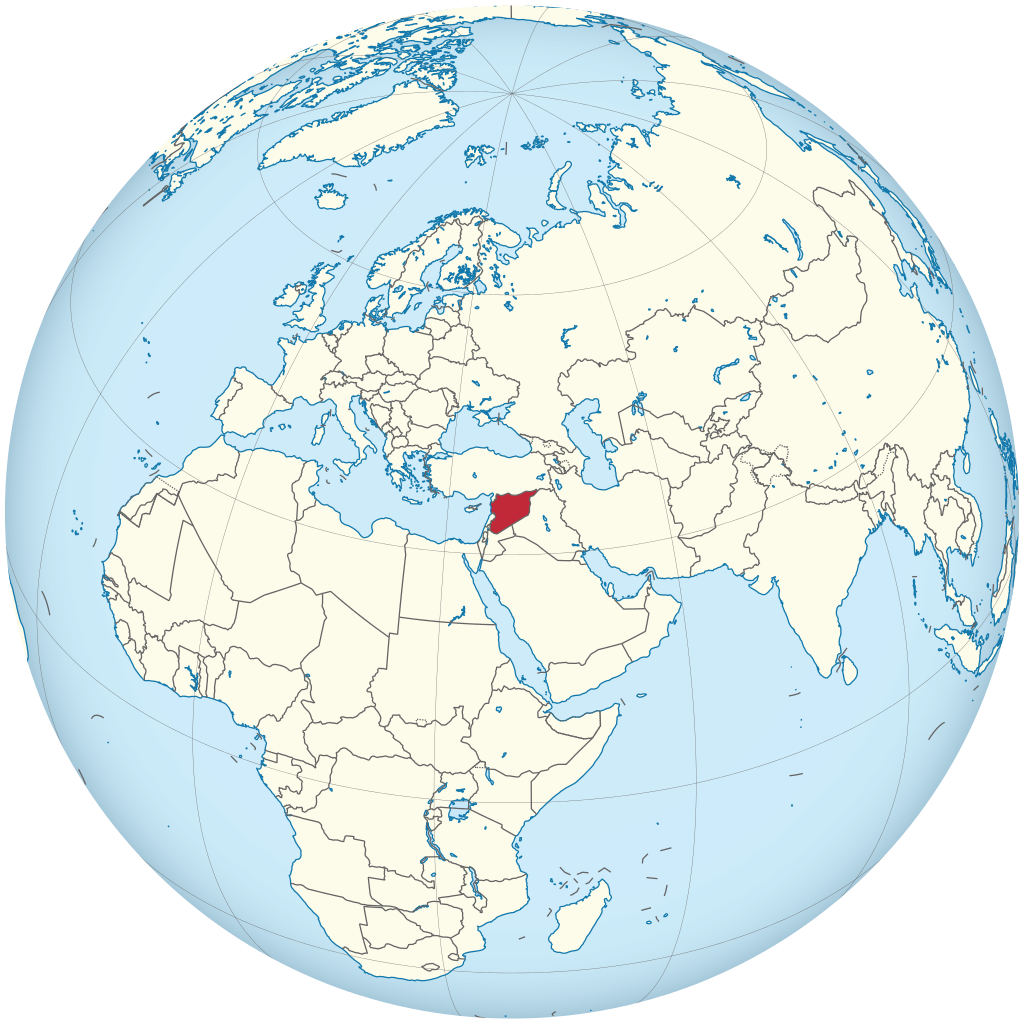 Satellite imagery has been used in various publications to illustrate the magnitude of destruction of Syrian cities such Aleppo, Homs, Dayr Zor and Raqqa. One promising but underexploited form of such imagery is that provided by light signatures: maps that capture the average intensity of nighttime illumination in a given locality. By way of example, Synaps has been exploring a set of free images, representing monthly nightlight averages spanning April 2012 to July 2017, made available by the National Oceanic and Atmospheric Administration, a branch of the United States Department of Commerce. While such images are by nature abstract and impressionistic, they can nonetheless provide valuable insight into the social, political and economic trends that have transformed—and continue to transform—the country.

Perhaps most strikingly, they capture the degree to which large swathes of the country have been plunged into literal darkness over six years of war. While all of Syria’s communities have suffered immensely throughout the conflict, such blackouts capture the more extreme levels of dislocation endured in certain localities. The shift from illumination to pitch black may signify one of several developments, or, most often, a combination thereof: physical destruction incurred by relentless aerial bombardment and/or systematic looting; depopulation, as communities were forced to leave en masse; lack of resources sufficient to sustain a basic economy, including power generation; and the absence of sociopolitical structures providing any but the most perfunctory forms of governance. A somewhat subtler but no less critical corollary of these emerging black holes regards the degree to which Syria has lost, since 2011, its overall cohesion as a state and a society, with the country’s various constituent parts increasingly separate from and alien to one another.

These images, moreover, are not merely a testament to the destruction that Syria’s war has wrought: they are also a stark, visual reality check at a time when Syria’s neighbors and the international community are increasingly tempted by the notion that the conflict is drawing to a close, and may soon permit the return of hundreds of thousands of refugees to their ruined homes across Syria. For the moment, however, no actor has demonstrated even the outline of a plan that would re-establish a degree of livability in these areas. Absent such a plan, discussions of potential returns to Syria remain decidedly premature, and indeed run the risk of generating momentum toward propelling vulnerable civilians back into the void from which they fled.

From integration to archipelago

A birds-eye view of Syria underscores the country’s atomization, most strikingly through the sparseness of light patterns across large swathes of rural, mostly agricultural territory in northern, eastern and southern Syria. If light signatures in such areas once resembled the Milky Way—with population centers linked together by more or less contiguous strings of less intense light sources—they now look increasingly like a disjointed constellation or archipelago, with islands of light surrounded by total or near-total darkness. Perhaps the most startling example of this trend is the transformation in light signature in the fertile territory along the Euphrates river, which runs from northern-central to southeastern Syria.

This shift has two likely explanations. First, Syrian government tactics—which rely heavily on indiscriminate aerial bombardment—have emptied out entire towns and villages in response to the presence of opposition armed groups. Second, conditions of wartime scarcity have predictably led to the concentration of resources—including electricity, and fuel to power generators—in population centers, which Damascus has understood as central to its survival. As a result, internally displaced persons (or IDPs) from rural areas have largely gravitated toward urban areas in which they expect to secure some minimum threshold of security and basic necessities. (That such migration is not reflected in increased light patterns of cities hosting IDPs presumably reflects those cities’ own resource shortages and out-migration.)

On a methodological note, we have chosen to use the imagery as is, with no “cleaning” to improve its clarity. Even raw, this material speaks largely for itself, and manipulation may have come at the risk of introducing undesirable biases. One issue worthy of note, however, are round blobs of light such as those which appear in the Syrian desert to the east of Homs; these marks are anomalies that would have been removed in a cleaning process, and here should be simply ignored. Commercial images, offering greater granularity, could support further explorations, for example on a neighbourhood level.

This trend, moreover, has dramatic implications for Syria’s future. For one, these wartime dynamics of rural-urban migration and preferential resource allocation have reinforced longstanding imbalances in Syria’s rural-urban equilibrium, which by many accounts helped fuel the conflict in the first place. Relatedly, the hollowing out of many rural, agricultural areas has the potential to incur longstanding demographic and economic knock-on effects, with which all stakeholders will need to grapple if any semblance of stability is to take hold in the foreseeable future.

Visual turning points in the war

The Syrian conflict arguably was at its ugliest in central Syria, where it exacerbated latent sectarian tensions and tended to pit certain Sunni constituencies against Alawites and small numbers of Shiites, while Christians and other minorities stayed largely on the sidelines.

While all sides suffered enormously, rural Sunni communities incurred the most thorough disruption. Zoomed-in images from central Syria capture this trend, showing discreet pockets of depopulation—or at least constant blackouts—where there were once small Sunni towns and villages between Homs and Hama and between Hama and Aleppo. Christian and Ismaili localities around Homs and Hama also were largely untouched, and thus fall in areas that remain bright. 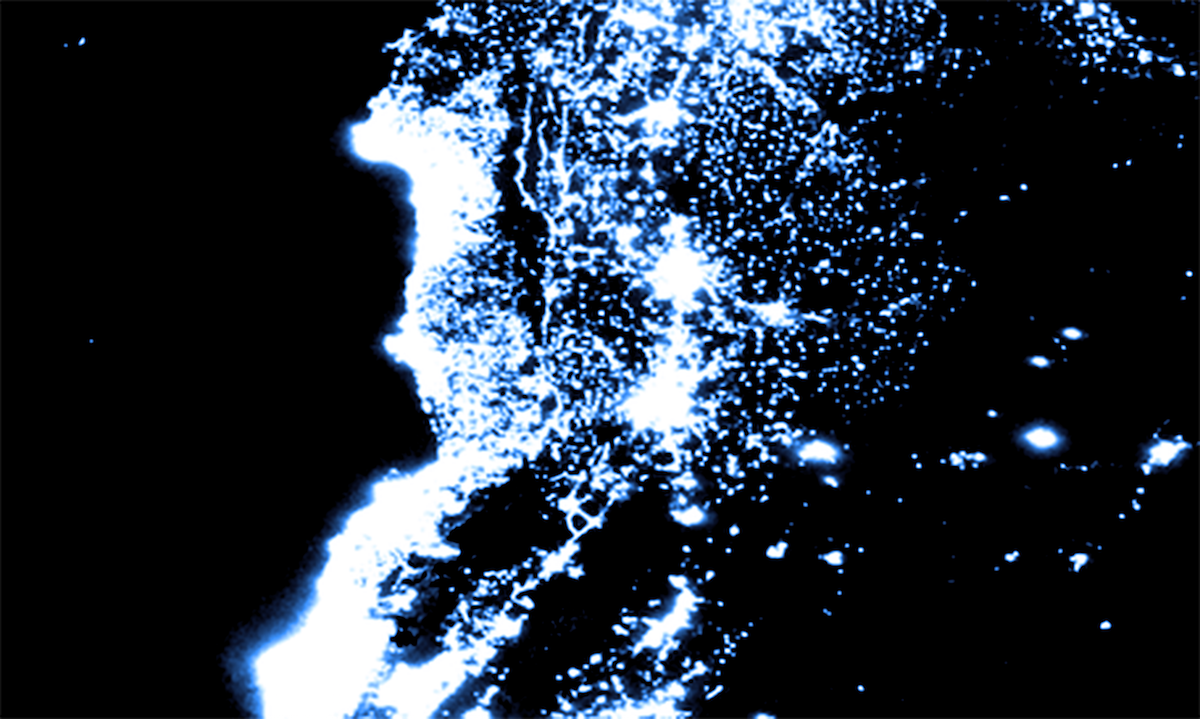 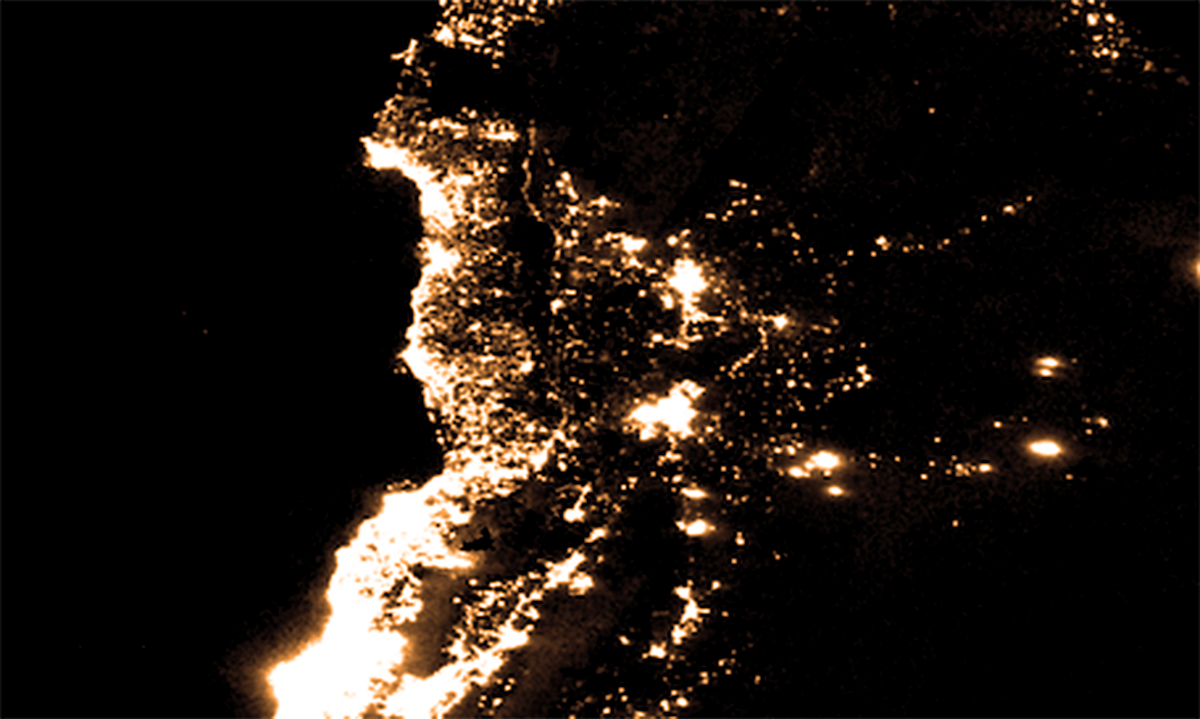 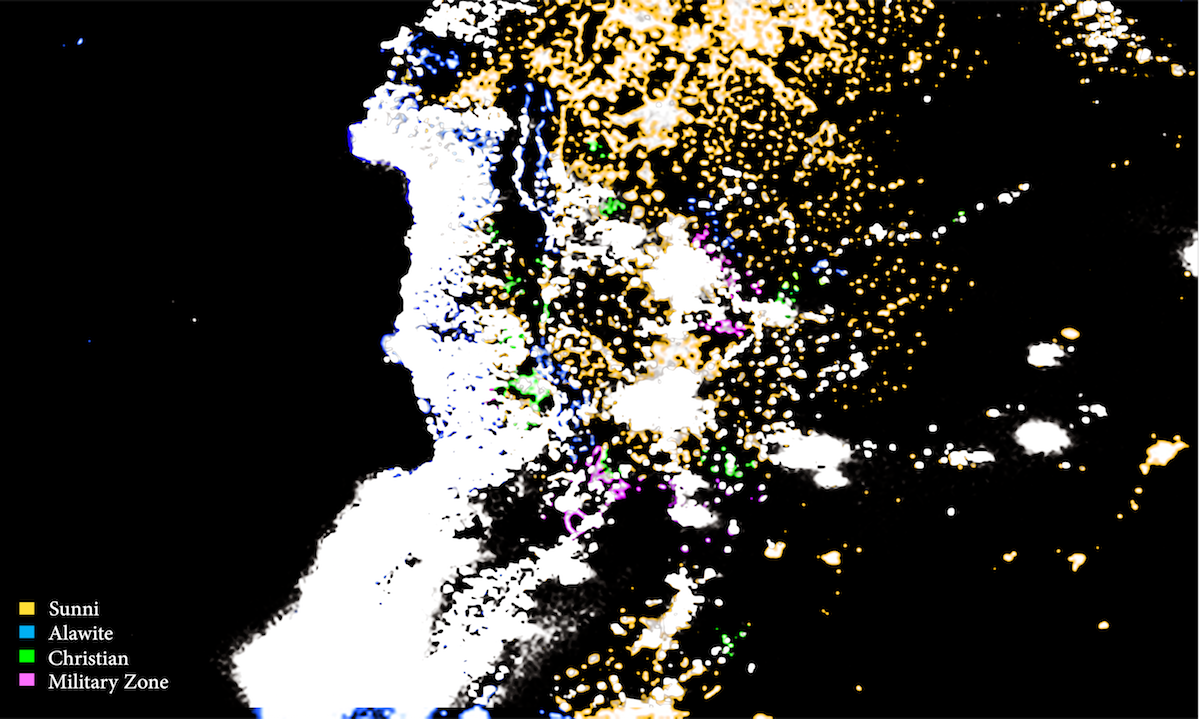 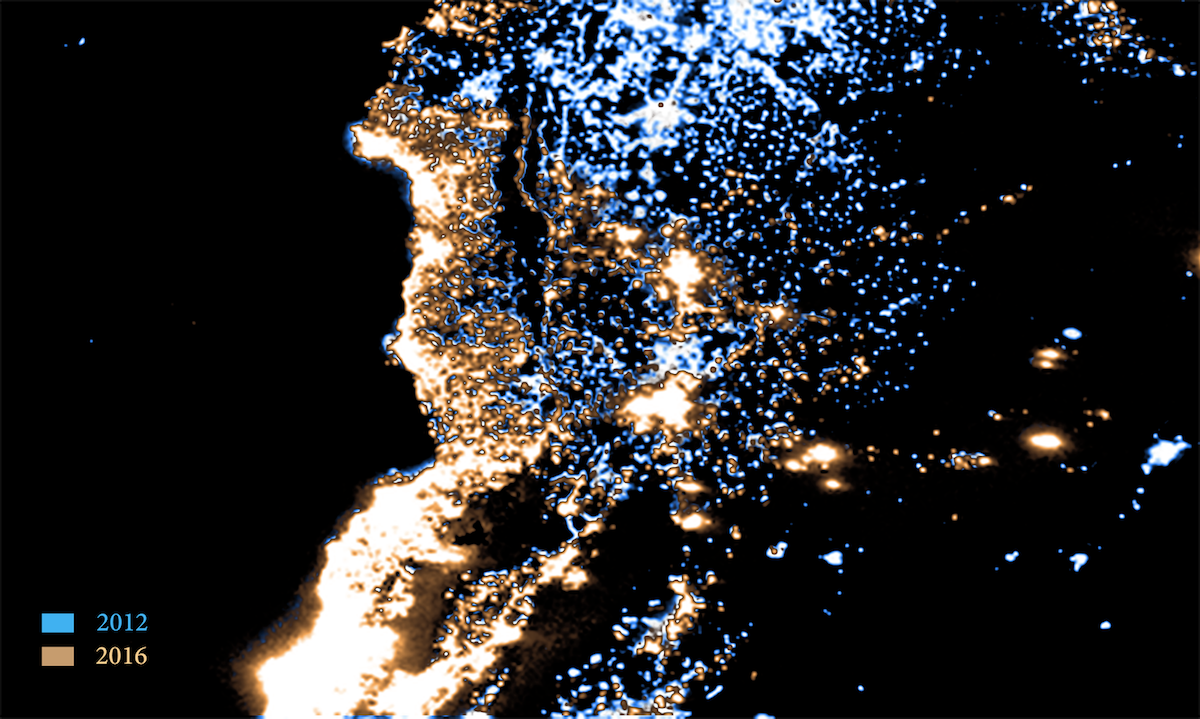 For their part, the cities of Homs and Hama remain well-illuminated—particularly when compared with the much larger city of Aleppo, which has been all but extinguished. The mostly Sunni city of Hama has endured by mostly abstaining from the rebellion, haunted by the ghosts of its own 1982 showdown with Damascus. Homs, however, endured widespread inter-sectarian violence; its continued visibility, therefore, is likely attributable to the continued operation (and associated light pollution) from its oil refinery and other industrial facilities. That being said, higher quality images would convey the uneven distribution of damage and depopulation within Homs, whose poor Sunni neighborhoods have been largely levelled.

In sum, this image is telling for what it says about the violent fallout between the regime and various Sunni constituencies, particularly in rural and semi-rural communities. Such dynamics will persist and potentially deepen in the period ahead, not least because the Syrian government is likely to devote disproportionate resources to restoring services and rehabilitating infrastructure in territory that has been relatively loyal throughout the conflict.

South of Damascus, light signatures reveal two distinct patterns that have crystallized in the period since January 2013. First and most striking is the patch of relative normalcy represented by Suweida governorate (also known as Jebel Druze) to the southeast, where the majority Druze population has painstakingly maintained its neutrality vis-à-vis Damascus.

This contrasts dramatically with the overwhelmingly Sunni Hawran region to the capital’s south and southwest, which early in the conflict became a bastion of opposition influence and, as such, has suffered widespread displacement and destruction. Likewise noteworthy are small pockets of Christian territory, which—much like the Druze community—have maintained a studious neutrality.

A second, subtler pattern lies in the two tendrils of illuminated territory that cut across the Hawran: one stretching south from Damascus to Daraa city and the Jordanian border, and the other southwest up to the Israeli-occupied Golan heights. These heavily fortified axes offer a potent representation of the Syrian government’s strategy throughout the southern front and elsewhere in opposition-controlled Syria: fall back to defensible, strategically vital positions, consolidate a foothold, and set about pounding surrounding territory into submission.

These trends further reflect the aforementioned dynamics of rural displacement and increasingly pronounced communal divisions visible across the country.

Wanted: lights at the end of the tunnel

Recent months have witnessed a pronounced shift in the international discourse on Syria. Increasingly, outside actors—ranging from the Lebanese, Turkish and Jordanian governments to their European counterparts and the United Nations—appear to be setting their sights on “the day after,” contemplating ways that Syrian refugees might begin to go home. Spring 2017 ushered in a limited but significant precedent in this respect, with tens of thousands of refugees returning from Turkey to areas of northern Syria following a mixture of Turkish and Syrian Kurdish operations to evict the Islamic State. Some areas witnessed a measure of revival that more granular imagery could help confirm, monitor and analyse effectively.

Raqqa and the Turkish border, contrasting March 2017 and April 2017

While this arguably represents a positive development, any discussion of returns to Syria deserves a large measure of caution and indeed concern. A growing narrative among Western and regional states supposes that active warfare has been the primary factor keeping Syrians from heading back to their cities, towns and villages. The reality, of course, is far more complicated, inextricably bound up with the patterns of social, political and economic degradation that have evolved throughout the conflict, and which are certain to persist or even intensify in the near-term.

Although the images discussed above help visualize the deep fractures incurred by Syrian society over six years of war, fault-lines existed long before its outbreak, and they were many: between competing cities, urban and rural, rich and poor, or various communal entities. Those fault-lines, however, have by now stretched into chasms. These will not be bridged in the near- or medium-term, in large part because no party to the conflict has demonstrated the slightest willingness or ability to build bridges. In just one striking example, the Syrian government has shown no interest in encouraging large-scale returns to areas it has reconquered; on the contrary, so far it has evinced an inclination toward social re-engineering in ways that threaten to exacerbate rather than rein in the country’s dissolution.

Did you like this article? If so, Synaps would love your help as we work to reach a wider, more diverse audience. Take 30 seconds to tweet, share on Facebook, or email to a friend—or visit our website to see how you can get involved with our work. Thank you for reading!

For as long as this remains the case, there should be no illusions: Syria’s conflict is far from over, and efforts to fast forward to repatriation will remain naïve at best and criminal at worst. Just as nightlight imagery helps illustrate major developments during the conflict’s escalation, it can likewise provide a powerful tool for documenting patterns of revival across different regions of Syria—particularly if deployed at the neighborhood level. Indeed, a recovery process driven by inclusive, forward-thinking urban policies would produce an altogether different light signature relative to one defined by cronyism and discrimination. International actors will inevitably play a role in propelling Syria along one trajectory or the other, and satellite imagery will prove one of various avenues for shedding light on the precise nature and implications of that role.

Grateful credits: Rouba Wehbe for the creative cartography, Charles Maalouf and Alameen Najjar for technical advice, and NOAA for the data. Syria on the globe by Wikipedia / licensed by CC.

The run-up to the crisis

Activists now and then